The subject valve of this root-cause investigation was 24-inch globe valve. The subject valve provided flow control in the Residual Heat Removal Service Water System at a U.S. power plant. The valve stem separated during functional testing that followed reassembly and valve/system setup. The image below shows the fracture surface through the subject valve stem.

Stem separation can result from fatigue failure or a one-time overload. Changes in stem material properties (embrittlement) or loss of part cross-section (due to erosion) can increase the progression or propensity for these failure mechanisms. Operating conditions and valve-system interactions can also affect the progression of the failure.

The root-cause investigation revealed that when exposed to system conditions, the flow pushed the plug out of alignment with respect to the seat. This misalignment caused the bottom edge of the plug to make contact with the top of the seat ring, preventing the plug from moving into position along the seat cone. The abnormal plug-to-seat contact created a substantial bending moment due to the closing force of the actuator.

The high bending moment resulted in a crack propagation that initiated at the discontinuity formed by the chamfer corner. It progressed across the stem cross-section, changed direction as the cross-section area reduced, and resulted in a sudden complete separation. Inspection of the surface along the fracture did not reveal signs of local polishing associated with low load, high cycle fatigue. The failure was due to a high load, low cycle condition brought on by valve misalignment caused by recent valve maintenance and tolerance stack-up. 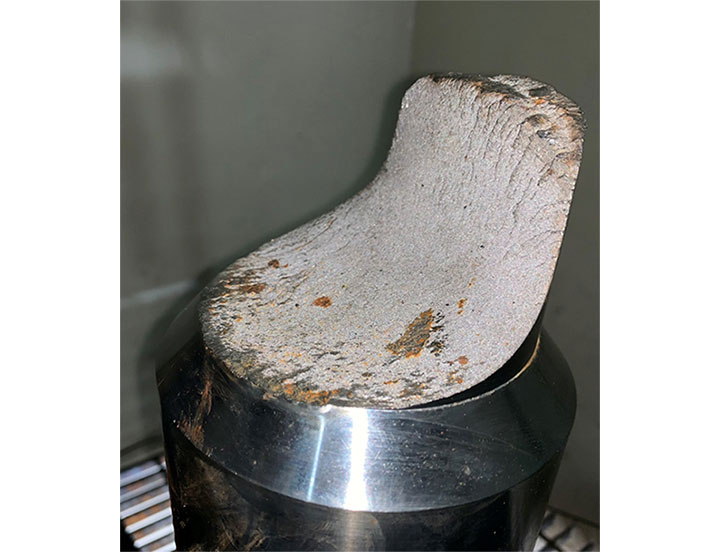