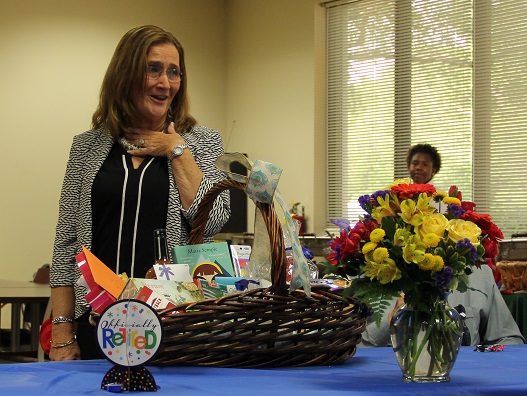 Kalsi Engineering, Inc. (KEI) has been in business for 37 years and Carla Louviere has been an employee for 23 of those years. She retired in April 2016 to pursue her personal interests, and a dinner was held at our Sugar Land facility on April 29, 2016 to honor her many years of dedicated service. The dinner was attended by her husband Peter Tiplady, her son Jim, her long time co-worker and friend Barbara (Bobbie) Benson, and the officers and employees of Kalsi Engineering.

Carla joined KEI in November 1992 to help with administrative tasks, including accounting, as a temporary employee. She was hired full-time later that year, and for the past 19 years has worked as an assistant to the QA Manager, and handled all the daily activities related to the quality program used with our nuclear clients.

Carla was born in Elton, Louisiana, and has two sons, eight grandchildren and two great grandchildren. As a teenager, she traveled extensively because her father was in the Air Force. Carla reminisces about her stay in Argentina, where she learned to speak Spanish, and is still rather good at it. Of course, she can also speak Cajun—but it’s hard to know what she is saying unless you know the lingo. Carla’s mother was a high school English teacher and also taught college courses after they settled down in Lake Charles, Louisiana following the Air Force tour.

Carla has a storied work history. In her early career, she worked for 10.5 years with the Lake Charles Sheriff’s Department. Using the law enforcement experience she learned there, she took on a security position with Wells Fargo, and then did a stint as a private investigator in Louisiana. She moved to Houston in 1982 to work in the oil services business, taking employment with two other companies before joining KEI.

In her years at KEI, Carla worked hand-in-hand with the QA Manager to ensure that our nuclear QA Program was in compliance with 10CFR50 Appendix B, 10CFR21, and other USNRC regulatory requirements. Her other responsibilities were as varied as coordinating our domestic and foreign trade show participation, and officially transmitting software to our licensees.

Carla enjoys competing as a shuffleboard league player, reading, and having a good time with her friends. She also closely follows her family activities, particularly when it comes to college sports. Her son Jim has coached several college volleyball teams and she tries to attend as many games as she can—proudly wearing the team colors and being a faithful supporter. Jim is currently coaching at Tulane University in New Orleans, and one of Carla’s granddaughters is a team member of that team. Now, with retirement, Carla will finally have more time to attend games back in her home state!

In addition to supporting family athletic events, for the past 16 years, Carla has shared her talents as a volunteer fundraiser with the Snowdrop Foundation, which provides benefits for childhood cancer patients, as well as research funding. KEI has been a proud sponsor throughout the years.

During her retirement, she plans to spend much more time with her family in Louisiana. She also wants to travel with her British-born husband, to show him the United States. Since she likes to cook (and is very good at it), we are sure she will also be serving up some Cajun cuisine to her family and friends.

At Carla’s retirement dinner, Vice President Daniel Alvarez and several other employees gave prepared remarks that combined sincere compliments, fond reminiscences, and inside jokes. In addition to her many years of faithful service and significant contributions, Carla was recognized for her exemplary personal traits.

Please join with us in congratulating and honoring Carla Louviere for her many faithful years of service. We are privileged to have had her as our coworker, and we send her our best wishes for her future adventures!