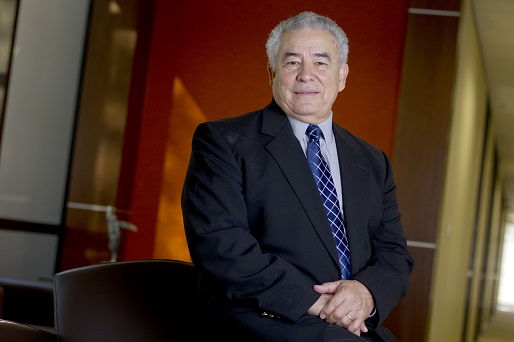 On Friday, March 17, 2017, Kalsi Engineering held a luncheon to celebrate Daniel Alvarez’s 37 years of service with the company, and the beginning of his transition to part-time work. He had thoughts of retiring, but we convinced him to remain employed part-time instead. Although Daniel began working for Kalsi Engineering in 1980, his long and productive association with the founder of Kalsi Engineering, Dr. Kalsi, began in 1973 — shortly after college graduation — when they both were employed by a major valve manufacturing company. After leaving that organization to form Kalsi Engineering, Dr. Kalsi invited Daniel to join his staff. Since then, Daniel’s services have been invaluable to the company in the capacity of both Engineer and Vice President. His modest calm demeanor, his competence in business and engineering matters, and his deep understanding of human nature have made him a trusted advisor to, and a beloved colleague of, every person in the company. How could we possibly let a man like this retire completely?

As an example of Daniel’s modesty, he was employed with us for 13 years before we found out that he served as Valedictorian of his high school class in 1968. Even then, it wasn’t Daniel who told us. Instead, we stumbled across this fact in a Washington Post newspaper article about his extended family that was reprinted in the Reader’s Digest magazine article: “The Amazing Alvarezes”.

Being here in the early days of the company, Daniel was deeply involved in the laboratory testing that led to our high pressure rotary seal product line. He designed our first high pressure seal test fixture in 1981 — a fixture that is still routinely being used now to test next-generation Kalsi Seals®. That first fixture was originally located in a modest laboratory that Daniel helped to set up in a rented storefront. Within a few short years, Daniel was supervising construction of our own office building and laboratory space, and has supervised every subsequent expansion of our facility. With our most recent expansion, just as he has always done, Daniel made sure that his office is just a few steps away from one of our well-equipped testing laboratories.

Although often overloaded with a variety of difficult management responsibilities, Daniel’s passion is and always has been design and testing of mechanical equipment. During his long and productive career, Daniel has performed extensive work in the design, analysis, testing, troubleshooting, and failure analysis of valves of all types including gate, globe, check, safety/relief, ball, butterfly, and plug valves, and has been awarded 12 U.S. Patents. He has designed a number of valve-related test fixtures, and has performed instrumented tests on valves under conditions simulating various combinations of piping loads, flows, pressures, upstream disturbances, and temperatures. He has also developed fixtures for testing bearings, rotary-shouldered connections, downhole tool components, etc.

As project leader, he was responsible for developing a sophisticated gate valve design effects test fixture under the Electric Power Research Institute Motor Operated Valve Performance Prediction Program (EPRI MOV PPM). A novel feature of this fixture was its ability to faithfully simulate the fluid dynamic forces and moments applied to the gate valve disc by using a computer controlled servo hydraulic system. Using this fixture, he conducted an extensive matrix of tests to evaluate the performance effect of the design feature variations and material combinations that are encountered in gate valves. He was also a principal contributor to the development of an improved gate valve design that offers superior sealing and is highly resistant to blow-down related damage and thermal binding in the high energy systems found in nuclear power plants.

Daniel was also the lead engineer in the Limitorque Actuator Thrust Rating Increase study performed by Kalsi Engineering for a consortium of nuclear utilities. He has also performed stress analyses to determine maximum stresses at critical areas of the drive train — from the actuator to the final inner valve element — and he identified problem areas to allow the correct settings for limit and torque switches.

Daniel was a principal contributor to the preparation of several application guidelines for valves and actuators in nuclear power plants that were first published in the 1990s and updated recently under EPRI sponsorship. He has contributed to a number of other important industry publications as author or co-author. He has worked on several projects relating to MOV actuator sizing and thrust requirements over a range of operating conditions for many major utilities; analyzed operability problems in different types of valves in power plants, pipelines, petrochemical, and oil field applications; and developed modifications to overcome operability problems. Mr. Alvarez was also project leader in performing MOV design basis reviews related to torque/thrust requirements, determination of set-up criteria, and improvements. He was the principal investigator for the EPRI MOV Margin Improvement Guide.

Another of Daniel’s major achievements has been overall project coordination of the Kalsi Valve & Actuator Program — The AOV Software with Technology KVAP®  — and the development of validated models for power-operated quarter-turn and linear valves and actuators along with the setup windows and measurements uncertainties.  KVAP is used in most nuclear power plants in North America and in many nuclear plants around the world. Within the sphere of Kalsi Engineering’s valve-related software, Daniel was also intimately involved with the intensive flow testing effort that made our Check Valve Analysis Program (CVAP®) possible, and has performed analyses on check valves at several nuclear utility companies in response to INPO SOER 86-03. He also developed a computer program to design ball valves ranging in size from 2” to 48”, and from pressure class ANSI 150 to ANSI 1500, and from API Class 2000 through 5000.

Daniel has performed extensive finite element analyses of gate valves for use in nuclear power plants, petrochemical plants, oil field industry, pipelines, high temperature service, and high pressure service, and has performed extensive modal and stress analyses on gate valves, ball valves, and globe valves to seismically qualify them for nuclear power plant service. He was also responsible for developing and implementing the quality assurance program for Kalsi Engineering that meets the requirements of 10CFR50, and design elements of ANSI N45, and ASME NQA-1.

Daniel has a number of attributes that help him to excel technically and socially, including being a fast learner, and being incredibly focused. He likes challenges, and never hesitates in accepting difficult projects.  We will miss having him with us five days a week to provide instant feedback on technical issues, and even personal issues. At the same time, we are happy in the knowledge that our dear friend and colleague now has more time to pursue his personal interests, many of which involve service to the community.